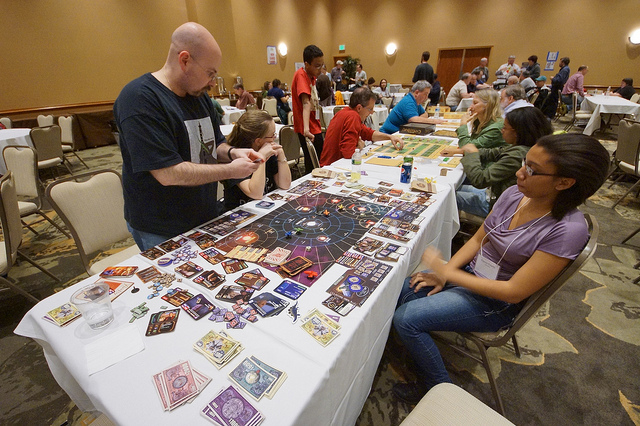 Officially, Open Gaming will begin at 9:00 AM on Thursday, November 10 and continue until 5 pm Sunday, November 13.  Unofficially, those arriving at the hotel on Wednesday evening, November 9, should feel free to engage in Open Gaming in the Arundel Ballroom while we are completing setup for the official start of the convention the next morning.

EuroQuest offers a combination of gaming experiences. In addition to tournaments, we provide games to use and space set aside for Open Gaming. Bring any game you want to play and take advantage of our Open Gaming space!

The Open Gaming area is in the same main gaming hall as the tournaments, so everyone is part of the same convention experience. You can do some open gaming in between tournaments or play some tournament games in between open gaming.  Overflow open gaming can also take place in one of the two side rooms (Prince George and Montgomery) at times when those rooms are not scheduled for specific events.  We expect to have some additional tables set up in the hallway outside these rooms that can also be used for overflow Open Gaming as needed.

Scheduled game demonstrations will take place in either the Tournament gaming area (for Main Event tournament games) or in the New Games Area (for all Wild Card game demos and all other new game demos). If you would like to learn a tournament game (or a game offered in the Wild Card tournament) and there is no demo scheduled, let us know and we’ll try to find someone to teach it.  We also expect to have several game designers on hand to show off their prototypes or recently published games.  See the Demonstration page for more information.

Feel free to bring your own games, or check out the many games available in the EuroQuest Gaming Library!