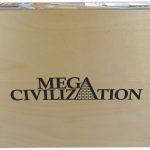 Other times as requested at the front desk
Demos will use “The First Game” script.

Game Start: Starts Saturday at 9 AM. Finish by midnight. Game length is dependent upon number of players. By starting, you commit to playing until the game ends. Do not schedule anything else for Saturday.

The game can accommodate up to 18 players.

Sign up by either emailing Jamie at jat@rtgames.com or at the front desk by Friday 8 pm.

Beginners are welcome, but should have read the rules or attended the demonstration.

Mega Civilization is an epic experience for between five and eighteen players. Via board movement, diplomacy, trading and technological advances, you choose how your culture develops. Each turn, you build cities which allow you to acquire commodity cards. By trading with other players, you make those cards into sets. The larger the set, the greater its value in currency toward acquiring technology advancements. Each technology provides victory points along with benefits and detriments. For instance, Monarchy allows you to increase your taxes and defeat more Barbarians, but it also worsens the calamity of Tyranny. Ah, calamities. Every turn, your people could be pummeled by disasters such as Epidemic or Civil War or simply by hostile neighbors. To win, you will need to weather those calamities, trade to your advantage and make wise purchasing decisions.