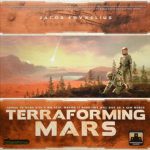 Welcome to the fourth Terraforming Mars tournament at Euroquest! Congratulations to last year’s champion, Jason Leggett, for successfully re-defending his prior titles.

All Terrans seeking to terraform Mars are welcome to play, as long as they have read the rules or attended a demo.

The rules for the various expansions will be covered. The GM will also answer any questions about the base game, but will not teach it.

CHANGES.  These are the rule changes for this year’s tournament:

RANDOMIZED MILESTONES AND AWARDS. Randomized milestones and awards (if available) will be used: (1) in games using the original board (with expansions); and (2) in elimination rounds. Refer to separate rules regarding use.

TURMOIL AND PROMO CARDS. Turmoil and promo cards may be used only in the semifinals and finals and only if all players agree.

FAST MODE. All players must take 2 actions each turn or pass. You may sell 1 patent as your first action and then sell a second patent as your second action.

If Venus is used, include the Venusphile Award and the Hoverlord Milestone. Remember: the starting player must advance one of the global parameters (including the Venus scale) at the end of each turn.  Due to time constraints, this rule is mandatory in all games.

You CAN build a colony or trade at a colony even if you cannot use their resources (Titan, Miranda or Enceladus).  Floaters, microbes and animals received when a colony is built or traded at may not be split between different cards but if received when trading may be placed on a different card than received due to a colony bonus.

Rules clarification:  We will refer to Board Game Geek for any rule clarifications not covered by the tournament rules. https://boardgamegeek.com/thread/1705209/official-faq-rules-clarifications.

If there are at least 32 total players:  The Top 16 players advance to the semi-finals, as determined by the standard EuroQuest tiebreakers. These players will play four 4-player games, the winner of each advancing to the finals. If there are less than 32 total players: With 4 or fewer unique winners, we will skip directly to a final with those winners.  If necessary, the next top ranked player(s) without a win will advance to fill the table to 4. With more than 4 unique winners, we will advance either 8 or 12 (depending on the number of unique winners) to a semi-final.  The next top ranked players without a win will be included to fill out the tables.  Advancement of non-winners in the semifinal will be determined by placement in the semifinal game and then highest percentage of the semifinal winner’s score.

The top 4 players from the semifinals will advance to the final.

Randomly determine seating (with the owner of the game sitting where they want and the other players sitting randomly around in order of clubs, diamonds, hearts, spades based on the card you drew for table assignment) and then randomly determine the starting player and proceed clockwise.

For each action you take, state OUT LOUD, what you are doing and do the following:  (1) for cards, state the name of the card and what it does; (2) state how you are paying for your action and place the payment in front of your mat so all players can see the payment; (3) adjust production and resources as indicated on the card; (4) place any tile on the board (and receive any placement bonus).  Hopefully following this order will reduce mistakes.

Any failure to properly implement a production box adjustment of the player playing a card MUST be corrected as soon as they are noticed.  If you have taken too many resources in production, you lose them immediately (if you do not have any, correct the mistake as best possible). If you have not taken enough resources, you do not get the resources missed unless the mistake is noticed before you take an action in the next generation and all other players agree you are entitled to the resources in question.  Once you have ended your turn and the next player announces a move, if you failed to remove resources from another player, you may not do so.  If you neglect to claim benefits as a result of the action of another player (e.g., Pets, Rover Construction, Arctic Algae, etc.), you must correct the mistake before you take an action in the next generation or you do not get the benefit.  If another player took or declined to take an action based on your resources or lack thereof and would have taken a different action, the latter player may take a different action unless it adversely affects a 3rd player. If you run into a problem, try to work it out and if not, ask the GM.

To minimize mistakes, do not mark production on your player board until you have a production level other than 0.  When you take production, first move your existing resources to the far right side of the production box. Then place your production on the left side. Before mixing the new resources and the old, have the player next to you audit the resources.

Appoint one player to move all players’ TR and global parameters and another to deal cards.  When moving TR, state out loud what the movement is – e.g., I’m moving red from 20 to 21.

The last turn greenery build is an extension of the current turn, so building takes place in current turn order.

Please fill out the scoresheet and start doing so before final scoring to prevent mistakes.  If 2 or more players have the same TR and the same amount of mega credits left over at the end of the game, in heats all tied players will be deemed winners; in elimination rounds, whichever tied player moved later on turn 1 will be the winner.

The following duplicative milestones/awards cannot be used in the same game:

Most Important Rule:  Have fun!