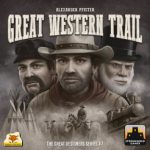 GIDDY-UP!Manage your herd and navigate the opportunities and pitfalls of the Great Western Trail. New players are welcome, so long as they have at least read the rules OR attended the teaching Demo.

The default edition for all games in the tournament (and the required edition in Semis/Final) will be Second Edition. First Edition will only be used in Heats if there is a shortage of copies, and IF used, will include the second edition changes to starting-hand setup.

2 heats of 2 1/2 hours. 4-player games are preferred but we will use 3-player tables if necessary to allow all players to play.

Reasonable effort will be made to split up family/team members where possible.

In heats, players will draft starting Objective Cards in reverse initial turn order. The placement and the side (A/B) of the neutral buildings will be random.

No promos. Some effort will be made to accommodate players interested in playing the Rails To The North expansion (heats only!), but this will depend on interest

Tie-breaker (in heats) will be REVERSE initial turn order.

Tie-breaker (in elimination rounds) will be leftover coins AFTER spending for game-end VPs, with second tie-breaker being bid-for initial turn-order.

After two heats, if there are eight or fewer game-winners, we will cut to Top Eight, and advance the top two from both Semi tables to the Final.

if there are more than eight game-winners, we will cut to 12 if needed, or 16 if possible, leading to a 4-player Final.