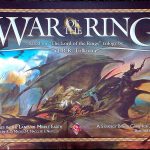 This year, the war game track will feature War of the Ring, a game first published in 2004, which covers the Lord of the Rings novels by JRR Tolkien. Numerous editions and expansions have been issued by its current publisher Ares Games. The approximate playing time is 3-4 hours.

A demo of the game will be held on Friday at 7 pm.

Report to the designated area for a round at the announced times. The GM will coordinate multiple games during each time slot.
We will assign players to opponents who they have not played before and who have similar records.

We will play the base game, two players, although expansions can be used if both players agree.

Please bring a copy of the game if you have one.

After three rounds the GM will either declare a winner or possibly have the best two records face off in a final, depending on time and availability.